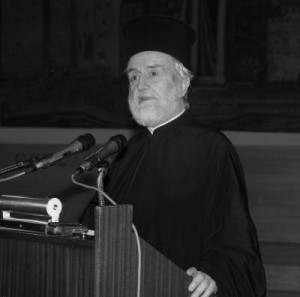 His Eminence Elder Metropolitan John (Zizioulas) of Pergamon taught at the Universities of Edinburgh and Glasgow, as well as London and Thessaloniki. He served as Chairman of the Ecumenical Patriarchate’s Religion, Science and Environment Committee (1995) and currently chairs its Halki Summits. He chaired the Orthodox/Anglican dialogue and the international Orthodox/Roman Catholic theological dialogue. In 1993 he was elected fellow of the Athens Academy of Arts and Sciences. His publications include Being as Communion (St. Vladimir’s Seminary Press, 1985), Eucharist, Bishop, Church (Holy Cross Press, 2001) and Communion and Otherness (T&T Clark/Continuum, 2006).