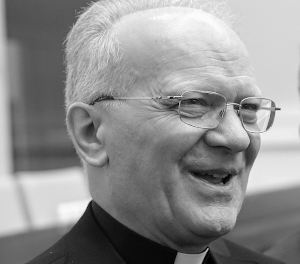 His Excellency Angelo Vincenzo Zani has served the Congregation for Catholic Education since 2002 (first appointed by Pope John Paul II), serving as its Secretary since 2012. He studied philosophy and theology at the Brescia Seminary, the Pontifical University of St. Thomas Aquinas (Angelicum) and the Pontifical Lateran University, where he received a doctorate in theology. Ordained to the priesthood in 1975, he attended the Pontifical Gregorian University, earning a License in social science. He taught at the Salesian Philosophical–Theological Institute and the Paul VI Theological Institute (1983–1995), and afterward at the University of Brescia, while directing the Episcopal Conference of Lombardy and the National Bureau of Education of the Italian Episcopal Conference. Pope Benedict appointed him consultant to the Congregation for the Doctrine of the Faith (2012), while Pope Francis appointed him consultant to the Congregation for Institutes of Consecrated Life and Societies of Apostolic Life (2014).